This post is the first of a three-part series on the life and writings of Charles Hammond Gibson, Jr., founder of the Gibson House Museum. Stay tuned for parts two and three in the coming months.

How does one measure a life dedicated to poetry, a writing life?   Charles Hammond Gibson, Jr. dedicated his entire adult life to the art of poetry, as poet, critic, editor, and literary personality.  He published his first poem in the Boston Transcript in 1894, and, toward the end of his career, he quipped to a curious listener at one of his many public readings, “My dear lady, I have been writing poems for fifty years.  They are like the droppings of pigeons all over the house.” His manuscripts overflowed from portfolios, closets, desk drawers, cabinets, drawing rooms, and even toolsheds! In some ways, Gibson’s poetry was closely connected to the domestic spaces he crafted, curated, and inhabited--his “Victorian Museum,” the Gibson House, and the spectacular gardens of his family’s exclusive summer residence, Forty Steps, Nahant. Like many traditional poets of the late nineteenth and early twentieth centuries, Gibson’s work is highly context-dependent.  His poems tend to be formal, referential, commemorative, and backward-looking--vintage before their time--the kind of poetry that was almost completely obscured by the advent of literary modernism.  On the other hand, viewed holistically, there is a compelling sense of quirky humor, passion, historicity, and mystery about Gibson’s writing, a body of work peppered with veiled autobiographical fragments that conceal as much as they reveal.

Early in his career, Charles Gibson lectured and published popular travel books about French architecture:  Two Gentlemen in Touraine (1899), penned under the name of Richard Sudbury, a nod to Longfellow’s Wayside Inn in Sudbury, Massachusetts, was a novelistic rendering of “French folklife, legend, and gothic architecture,” loosely based on Gibson’s romantic friendship with the (self-styled) Count Maurice Mauny Talvande (1861-1941), an eccentric polymath married to Lady Mary Byng (d. 1946), maid of honor to Queen Victoria. Among French Inns (1905), a humorous and chatty travelogue, was published in at least four editions through 1911.  Gibson’s first love, however, was poetry, which he published in tasteful limited editions, individually signed and sold by subscription, a genteel publishing practice with roots in eighteen-century manuscript circulation and nineteenth and early-twentieth private publication.  The first printing of The Education of Henry Adams (1907) falls into this category.

In 1906, Gibson published his first book of poetry, The Spirit of Love and Other Poems.  A spiritual autobiography in verse, Gibson, repurposing a poem from 1896, dedicated the book
To those who love, yet ne’er have known
Whence their true love hath strangely grown;
To those whose hearts to hear withal
Celestial voices sweetly call,
From far on high, new thoughts of love,
That lift their very souls above;
To all who, or sad, or gay,
To these I dedicate my lay. 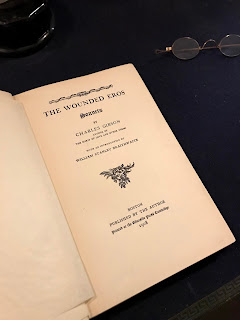 In 1908 Gibson unveiled The Wounded Eros, a bitter-sweet sonnet sequence, with an interpretive introduction by the brilliant young African American literary scholar, editor, and poet, William Stanley Braithwaite (1878 – 1962), who would later participate in the Harlem Renaissance, publish scholarship on English Romantic poetry, and write and publish his own verse.  Braithwaite described The Wounded Eros as “a series of love-related sonnets” and an “episodic drama of a man’s heart.”  Gibson would publish poems in newspapers, annuals, and even read them on Boston radio for the rest of his life.

Like Emily Dickinson, Gibson sought and received feedback on his poetry from Thomas Wentworth Higginson (1823 - 1911), who thought the young poet’s work had promise but wanted originality. Writing to Gibson in 1907, Higginson provided harsh but valuable technical advice on rhyme, meter, diction, form, and literary influence. Like Dickinson, Gibson penned a variety of homely garden poems, and his work is suffused with nature imagery.  As Gibson matured, he took a leadership role in Boston literary society, serving, for example, as the editor of the American Poetry Association’s Year Book of Poems for 1926.  In his lectures and editing work, Gibson promoted the great “cultural and educational value of poetry” but, like William Stanley Braithwaite, staked out a conservative and staunchly anti-modernist aesthetic stance. “If we attempt too much,” he warned his readers in 1926, “either in ‘original sin’ or original virtue, we are more apt to fall to the ground, than if we keep the inspiration of the mind harnessed to reason and good form, rather than allowing liberty to degenerate into license, in our attempts to fly too far afield.” In the end, the “original sinners,” imagists such as Amy Lowell and Ezra Pound, for example, won the day, and Gibson became a poet that time forgot.

And yet there is virtue in remembering.  There is wisdom and recompense in not rushing to judgement. Through the lens of Charles Gibson’s life and writing we are able glimpse literary Boston at the turn of the nineteenth century, a lost world, a time and a place where art and poetry were essential aspects of everyday life.  If we listen carefully, we can begin to understand what it means to have been a gay artist and intellectual in a Puritan city where social position and appearances mattered, a conservative aesthete in a dramatically changing social world, a genial extrovert and eccentric who became increasingly isolated as he aged in place, and who, in the end, became a “disembodied spirit,” as he put it, inhabiting a wondrous museum of Victorian antiquities of his own design.


To explore Charlie Gibson's life in more detail and in the context of the Gibson House Museum, we invite you to watch Dr. Gernes's short film, "The Wounded Eros: Remembering Charles Hammond Gibson, Jr."
Posted by Gibson House Museum at 3:39 AM No comments:

Email ThisBlogThis!Share to TwitterShare to FacebookShare to Pinterest
Labels: Charlie

The Mystery of the High-Backed Chair

Tucked into a corner of the dining room at the Gibson House sits a high-backed armchair. In 2018, long-time museum patron Robert Severy offered to fund a restoration of this chair, as the red upholstery had cracked and faded. But what, exactly, would we be restoring? To solve this object mystery, we needed the help of two esteemed curators, a fabric reproduction specialist, and a restoration studio.

Step 1: Research.
Per Charlie Gibson’s probate inventory (an accounting of possessions taken at the time of death), we know the chair was in the Gibson House in 1954. Museum records indicated our chair was an 1850s copy of an earlier style of chair; however, a note in the files suggested the chair was originally caned and therefore much older. Which story was correct? We needed more information.

Step 2: Call in the experts.
Two furniture curators, Thomas Michie (Museum of Fine Arts, Boston) and Brock Jobe (University of Delaware), were kind enough to come by and examine the chair from top rail to castors. Thanks to their expertise, we learned that our chair was an original William and Mary-era high-backed chair, of a type mass-produced in London in the late seventeenth century. It was originally caned. How did the chair make it to America? Not clear, but also not surprising, as these chairs were quite popular throughout the Atlantic World. It was evident that the chair had been re-made; the seat rails were trimmed to accommodate a slip seat, and the original feet were cut off and replaced with castors. The most exciting discovery was finding remnants of previous coverings, including eighteenth-century linen and Gothic-style oilcloth, underneath the late nineteenth-century red naugahyde upholstery.

Step 3: Restoration time.
Since our chair had gone through a few different looks over its history, we first needed to determine which period to restore it to. The seventeenth-century original caning didn’t necessarily make sense in the context of a nineteenth-century Victorian home. Maybe the Gothic oilcloth better connected the chair’s story to the Gibson story? We hired fabric restoration specialist Marylou Davis to reproduce an exact copy of the fragment of oilcloth. First, she developed a pattern by hand and created stencils. Then, she stretched and hand-colored the canvas cloth to match the original sample. Finally, she printed and varnished the cloth.

Next, we sent the reproduction oilcloth and the chair itself to the restoration studio at Trefler’s for re-upholstery. The furniture conservators also did some structural work around the joints and finials, although it was important to us that we preserve the black-paint layers and patina.
Step 4: Install and admire.
After almost a year of research and restoration, our chair returned to the dining room last spring. The gold accents in the reproduction fabric are a perfect complement to the rich red carpet. And the fleur-de-lis design echoes the etchwork in the glass doors leading into the dining room. We now know more about the path this chair took to reach us, and we are better able to tell its story and put it in the context of the Gibson family collection. Unraveling this mystery has made this piece one of my favorites.

We are featuring some of our favorite objects over on Instagram. Come see!
@gibsonhousemuseum #FromHome #GibsonHouseFavorite

Posted by Gibson House Museum at 5:23 AM No comments:

On the Occasion of the 250th Anniversary of the Boston Massacre

On March 5, 1770, a riot broke out on King Street (now State Street) in front of the Custom House in Boston. Soldiers fired into the crowd and killed five civilians. This dramatic event came on the heels of weeks of upset between colonists and British soldiers occupying the town. Its reverberations would be felt all the way through the American Revolution.

A copy of the famous print of the Boston Massacre, as the event would come to be known, hangs in the red study at the Gibson House. You might know the one I’m talking about. It shows a line of soldiers, in red coats with muskets, firing into a crowd. Three men in the foreground are seen shot and dying on the street. (This particular copy does not include Crispus Attucks, an African-American man born into slavery, and a well-known victim of the Massacre.) Well-dressed colonists look on in horror.

Paul Revere produced this illustration just three weeks after the event, titling it “The Bloody Massacre Perpetrated in King Street, Boston.” (He appears to have copied the image from the work of fellow printer, Henry Pelham, whose similar depiction was published around the same time.) The print became a famous, and important, piece of propaganda. It did much to inflame colonial sentiments against the British, even as it depicted an inaccurate portrayal of the actual event.

Why is there a copy at the Gibson House? This particular print was produced for the 1876 Centennial (purportedly on original plates from the archives of the Massachusetts Historical Society). It was first owned by Charlie Gibson’s uncle, Dr. John Collins Warren; Warren gave it to Charlie in 1904.

Charlie Gibson was incredibly proud of his Revolutionary-era ancestors. His great-great-uncle, William Dawes, joined Paul Revere on his famous midnight ride. His other great-great-uncle, General Joseph Warren, was “martyred” at the Battle of Bunker Hill. General Warren gave a famous and stirring speech on the fifth anniversary of the Boston Massacre in 1775, linking the event to the cause of revolution. Indeed, this print hangs in the middle of two others related to General Warren—a shrine, of sorts, to a famous and important ancestor. For a man as obsessed with history and legacy as Charlie Gibson, being able to link your family’s story to one of Boston’s most important and well-known moments on the world stage would have been very gratifying.

Posted by Gibson House Museum at 8:11 AM No comments: