The Gibson Ladies and the Vincent Club 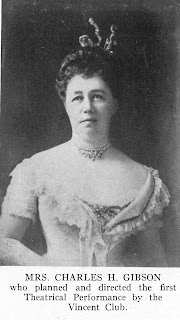 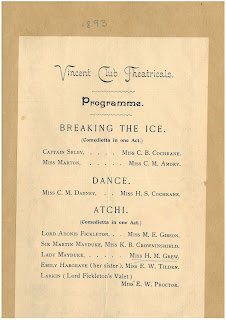 A century ago, most Bostonian women of a certain social standing participated in any one of the numerous, yet highly exclusive, women’s clubs in the city. Exclusivity characterized the nature of the clubs, but the majority actually focused their energy on various types of charity work—a noblesse oblige approach to social groups.

Vincent Club fundraising techniques exceeded the common luncheon. The club’s annual fundraising show—a vaudeville performance inspired by Mary Ann Vincent’s theatrical career and featuring the “Vincent Ladies”—arrived on the social scene every year beginning in 1893 to great anticipation. The “Vincent Show” typically took the form of a topical satire, featuring Boston’s finest young women performing a multitude of acts. Themes ranged from the inaugural “Breaking the Ice” show to the 1959 musical depicting life on an “interplanetary space platform.” The show also served as a light-hearted debutante ball, in which young women made their “stage debut as singers and dancers.”

Unlike a traditional debutante ball, however, there was a strict ladies-only rule on stage and in the audience. In 1899, the Boston Daily Globe published its annual Vincent Show preview feature, stating, “It was distinctly stated and printed on the tickets that no gentlemen would be admitted…. [T]hose who appeared in the leading roles had the supreme confidence of appearing before a friendly audience and were as much at ease as if entertaining in their own drawing rooms.”

Mary Ethel Gibson (1873–1938), referred to in the Boston Daily Globe as having “always been popular in society,” was a founding member of the Vincent Club along with her mother, Rosamond Warren Gibson (1846–1934). Rosamond planned and directed the first theatrical performance, while Mary Ethel performed in that 1893 show, starring as a man named Lord Adonis Fickleton.

In 1941, the Vincent Memorial Hospital merged with Massachusetts General Hospital, providing gynecology services while maintaining its own identity. When the Vincent let its independent hospital license expire in 1988, MGH agreed to keep the VMH’s name associated with its former programs.

The Vincent Club is still extant, with a current membership of 1,200 women. A fancy spring gala has since replaced the Vincent Show as the main fundraising event. Male attendees are welcome at the gala, as the “no men allowed” rule was rescinded in 1920.


Posted by Gibson House Museum at 9:28 AM No comments: