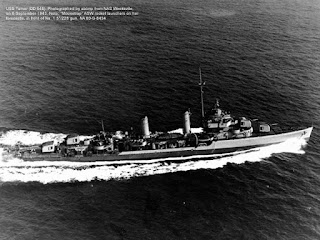 Recently during my summer internship with the Gibson House, archiving a collection of family manuscripts, I was surprised to discover evidence of yet another Gibson family member death at sea, that of Lieutenant Warren Winslow, the twenty-five-year-old son of Rosamond Gibson Winslow (“Little” Ros). (An earlier GHM blog post covered the death of John Gardiner Gibson, Jr. aboard the Lyonnais; see “History Repeats Itself,” January 1, 2015.) Lt. Winslow, a Harvard graduate called to service when he was attending Harvard Law School, was one of the 139 sailors lost when the USS Turner, a naval destroyer, sank to the ocean floor just a few miles northeast of Sandy Hook, New Jersey, on January 3, 1944.
A series of explosions aboard ship that morning completely wrecked the vessel and started fires that could not be effectively controlled. While the navy later could not determine the exact cause of the first explosion, an investigation turned up no evidence of enemy action or sabotage. The official report could only suggest that stored ammunition on board had something to do with the incident, as the first explosion occurred in an area containing ammunition meant for transfer later that day.
After a sixteen-day voyage on the Atlantic, the USS Turner had anchored a few miles off of Sandy Hook early on the morning of the third and had begun preparations to sail for Gravesend Bay, New York, to transfer its cargo of ammunition to Fort Lafayette in Brooklyn. The sky was overcast and snow was falling in the area. Nearby were other naval vessels, including the USS Stevenson and USS Thorn, which maintained a continuous underwater sound search. These sonar sweeps detected no enemy craft in the area.

So it came as a complete shock when, at about 6:17 a.m., a violent explosion rocked the USS Turner. The explosion blew major holes in both sides of the ship and started an intense fire, which triggered additional explosions over the next two hours. According to a report issued by the navy later that day, “All communications on the ship were disrupted. . . . The bridge buckled and collapsed [and]. . . . Many men were blown overside into the water by the blast.” Robert Freear, a machinist mate and USS Turner survivor, would later recall what he witnessed immediately after the first explosion:


“I heard screams of men who were trapped in the wreckage and were burning to death. I went to the door of the main mess compartment and looked in—nothing but flames, acrid smoke, and screams of agony!”
After a frantic search through smoke and blackness, Freear managed to get topside. “We found ourselves in a howling blizzard. I will never forget the [acute] sensation caused by snow coming into contact with red hot skin.”

Despite being separated from their officers, who were quartered in one area of the ship and unable to escape, the sailors who made it to the top deck did not panic. They maintained their cool and rescued injured sailors before taking measures to get off the ship, all while several more explosions occurred.

Coast Guard vessels in the area came to the aid of the doomed USS Turner, attempting to put out the fires and rescue sailors. At 7:05 a.m., almost an hour after the first explosion, the order was given to abandon ship, and 154 men boarded the vessels and were taken to safety.

The final and most violent explosion occurred at 7:50 a.m. The ship capsized and sank ten minutes later. A crew of divers later found the remains of the USS Turner, broken in two and surrounding a mess of tangled wreckage.

The USS Turner explosions were so massive and violent that they caused damage on land in the New York and New Jersey areas. The Brooklyn Daily Eagle reported broken windows, and even a toppled chimney, from several miles away.

A few weeks following the disaster, the navy released its final investigative report, which included not only a reconstruction of events but casualty statistics. Of a crew of 293 men, 139 went down with the ship, killed either by the explosions, the fires, or drowning in the icy Atlantic waters. Of the 154 survivors, about 70 were hospitalized for serious injuries in nearby military facilities. Fifteen out of 17 officers were killed as a result of their being quartered in an area cut off from escape routes. (The judge advocates assigned to the investigation consequently recommended that, in future, officers be housed in at least two separate areas of a ship so as to minimize the risk of total officer casualties.)

We can only imagine how Rosamond felt about the death of Warren, her only child. We do know that her brother Charlie was so moved by Warren’s death that he wrote a poem commemorating it, writing to Rosamond that “The terrific drama that attended the tragedy of his loss is calculated to shake our emotions to their foundations, and it has moved me more than I can say.” Warren’s death also inspired a tribute by his cousin, the poet Robert Lowell, whose “Quaker Graveyard in Nantucket (for Warren Winslow, Dead at Sea)” has been described as “one of the great elegies of the English language.”