Something about Charlie Gibson fascinates. His many quirks, his devotion to preserving the past, the tragedy of his being born in the wrong era, his egoism, and his inflexibility are all what make him so very human. He also provides rich ground for the student of history as one peels back the layers of his personality. Recently, while digging around in the archives, I stumbled on a transcript of an interview with an acquaintance of Charlie's, Mr. Lester Beck. While I found the interview charming, it simultaneously reaffirmed and challenged what I thought I knew about Charlie. Here are some of my favorite bits: 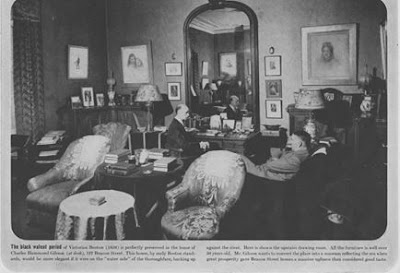 "Q.: Mr. Beck, how did you meet Charles Gibson?
L.B.: I had been living in Boston, and I read a Life magazine article about him. It was about 1939 or 1940. One day, I just stopped in--I just stopped at the house here and told him I was interested in old homes and such, and so he invited me in, and showed me around. At that time India’s separation from Great Britain was a big event, and Mr. Gibson was corresponding with Ghandi.
[Editorial note: The Life magazine article mentioned was published in 1941 and was entitled "John Marquand's Boston." The image above is from that article. Charlie is sitting at the desk, while author John Marquand is on the right.]

L.B. [upon being brought by the interviewer into the dining room]: He still ate in the dining room by himself. I believe he always ate in this room. He didn’t seem to have many friends, particularly. He always had the table set with everything on it--much more, many more things than are set out now. He ate alone, here [to the right side of the table, upon entering]. He ate very sparingly. Very sparingly. He was cash conscious. He was also very class conscious. He said there were some people who had to do these things [indicating pantry area]. I don’t believe he ever had more than one servant, but he did always have one, a butler, or handyman, or whatever they called them. I remember once he had a butler--a young man--and one time the police came after him [the butler] for something, and Mr. Gibson complained that the police tracked [dirt] all over the carpets.

[Editorial note: It is highly unlikely that Charlie had a butler at this time, especially if he was so cash conscious. He more likely had a hired hand, a "man of all work" who did a variety of tasks.]

L.B.: Mr. Gibson was always thinking that things weren’t what they once were. Boston was changing. Harvard admitted people who once would never have gone there, he said. He lived for this house. He lived for the old times. He was so fond of his mother. He was conscious of who he was. But he was very careful [of money]. I remember once when I came over he suggested that we go 'round to the Ritz Carlton bar for a drink. When we put on our coats to go out, he put on a raccoon coat with a big split up the sleeve. He wore it that way. We went to the bar, and after we had had drinks, and he had paid for them, the waitress stood by [waiting for her tip]. He waved her away, and said, “I’ll take care of you later.” He never did, though. He was very careful with money, and class conscious.
No, he really didn’t want things to change. He was part of the old times, the formal times. He always shopped at Brooks Brothers. He was always dressed properly.
I especially remember one thing about him: he was a chain smoker. He was always smoking, and of course there were ashes, so he carried everywhere in the house with him a little broom on a long handle. When he dropped the ashes, he would brush them into the rug and say it was good for keeping moths away."
What I find most striking about this interview is Mr. Beck's overall characterization of Charlie as someone who "really didn't want things to change." He mentions this several times, and this is what has always struck me as a mainstay of Charlie's personality. What Mr. Beck seems to have witnessed in many forms is that for Charlie Gibson, the passage of time was a painful ordeal.

Letters from Cuba: Fourteen Months as an Army Surgeon 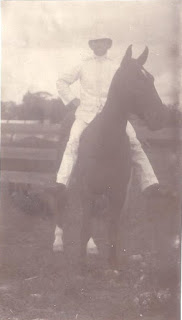 “I am writing this letter from the camp of the 7th US Cavalry with two troops of which I have been out on a practice march since Jan’y 13th. . . . We are now in our third week and on our way home and we hope to reach Havana in about five days. I have a fine little horse that I have had for about 6 months and he is standing the march splendidly.” These words Dr. Freeman Allen wrote from Cuba to future wife Mary Ethel Gibson in January 1901. The doctor had been in Cuba for a year by that point, hired on contract by the US Army as acting assistant surgeon in western Cuba. Altogether, the young army doctor spent fourteen months on the island as part of the American occupation force in the years after the Spanish-American War (Feb.–Dec. 1898).
Soon after graduating from Harvard Medical School in 1899, Dr. Allen received an officer’s commission as a first lieutenant, arriving in Cuba in January 1900. Lt. Allen excelled in his role as acting assistant surgeon, tending to the care of the men under his charge and performing occasional operations. He wrote of these experiences to Mary Ethel, documenting his life and work in an occupied island nation. Sadly, we do not have Mary Ethel’s responses in our collection, but Dr. Allen’s letters nonetheless sketch an interesting and exciting picture of his brief career as a contract surgeon in Cuba.
For his first major assignment, the army appointed Lt. Allen to the staff of General Fitzhugh Lee, former Confederate general and then commander of the 7th Army Corps. As a medical officer, Lt. Allen was entitled to both live and work in Lee’s headquarters, a large marble mansion known locally as Lee’s Palace in Quemados, Cuba. And from his letters it is apparent he enjoyed his time there.
While he wrote little to Mary Ethel about his professional responsibilities as a medical officer in Lee’s Palace, Lt. Allen had much to say about his social life when he was off duty. “There is quite a society, . . . and there are dances all the time to which I go or used [to], when they were more frequent.” Besides attending social engagements, he also seems to have been amused by the general’s daughters who lived at the palace. Describing them as “pretty but utterly extraordinary” young ladies, Lt. Allen was taken by the amount of attention they expected from men. “They consider that when they meet a man he should fall all over himself to see them and be unhappy if he cannot see them every day and oftener.” He was quick to mention to Mary Ethel that he was impervious to their Southern charms and refused to debase himself by engaging in any “bare-faced jollying,” presumably his term for flirtatious behavior.
It wasn’t until the army reassigned him to the Post Hospital at Columbia Barracks, where the 7th Cavalry was stationed, in late 1900 that he described his actual medical work in any detail. From reading his letters, one gets the impression that the doctor got his first real taste of military life only after losing his privileged position at Lee’s Palace and being assigned to care for enlisted men.

“I am in a large hospital where they do good surgery although the cases are very few because the command is in exceptional health; I have a ward to myself, I instruct the hospital-corps men in anatomy and minor surgery and also in field drill; and I get an occasional minor operation for myself. . . . The Corps has a fine operating room, an X Ray machine, a large disinfecting plant, and two yellow fever camps, although just at present there are very few cases of this disease out here, they are all in Havana.”

In his letters to Mary Ethel, Lt. Allen mentioned yellow fever several times. For American soldiers stationed in Cuba, the risk of contracting the disease remained a constant threat. Immediately after the war, the US Army committed itself to sanitizing civilian and military facilities in an effort to rid the island of yellow fever. But the method of transmission of the disease was still unknown. So a research board of army doctors was assembled for the purpose of studying and eradicating yellow fever in Cuba. “Major [Walter] Reed and his Tropical disease board are stationed here [Columbia Barracks],” Lt. Allen wrote, “and pursue their very interesting investigations in regard to the mosquito theory of yellow fever.” Eventually, through many trials of experimentation, the board confirmed that the mosquito transmitted the disease. While he does not make mention of it to Mary Ethel, Lt. Allen assisted the medical board in their research on yellow fever, thereby opening himself up to the risk of exposure.
By early 1901, Lt. Allen had grown tired of his duties in Cuba. “I am getting sick of Cuba. There is no work to be done here and although the pay is good and the life pleasant . . . I am making very little progress in my profession.” Eager for a change of scenery and work life, Lt. Allen annulled his contract with the US Army in April 1901. Soon after, Dr. Allen became the first anesthetist at the Free Hospital for Women in Brookline, though it’s easy to imagine him looking back fondly on his time in Cuba.

Image: Dr. Freeman Allen in Cuba, atop his horse (mentioned above), Billy