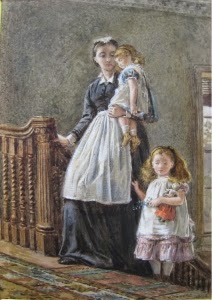 Having servants was a status symbol in the Victorian era. Many households with a domestic servant only had one, who was expected to perform all of the tasks described in my last post. She cooked, cleaned, cared for children, stoked the fires, served meals, took callers, and served at the beck and call of the family. Domestic servants in these situations felt that it was too much work, and understandably so. Additionally, being the only servant could cause these domestics to feel incredibly lonely. Servants constantly searched for better household situations. More servants in a household meant a greater division of labor, which meant a more manageable workload for each servant. A position at the Gibson House, where there were sever servants, might have been quite coveted because there was an adequate division of labor.

The downside to being in a home with multiple servants was that there might not be adequate living space for everyone. Living quarters might be above the kitchen or in the attic, meaning the space would be extremely hot in the summer, and extremely cold in the winter. Kitchens were often dark and gloomy, with little sunlight. At least one domestic servant in New England described living above an attic with three other servants, and inadequate sanitary conditions. Nursemaids often didn’t have their own room, and instead had to sleep in the same room as the children they cared for. Conditions like these might have also driven a servant to look for a better position.

The Gibson House’s servant quarters were much more comfortable than many of the period. Five of the servants lived on the fifth floor of the house, which has four bedrooms. The heat from the central ventilation shaft probably didn’t reach up to the fifth floor, but two of the rooms had fireplaces. There’s also a bathroom on that floor. The governess had her own room next to the nursery on the fourth floor. The kitchen, where the servants would have taken their meals and spent much of their free time, can be dark and gloomy, but it does have several windows for ventilation and light to enter the room.So it seems that in terms of accommodations and workload, a position at the Gibson House was probably better than most available to domestic servants at the time. But we must also consider what the Gibsons were like as employers, since one of the most important factors in the quality of life of a domestic servant was the family on eworked for.

We don’t really know how the Gibson family and their domestic servants interacted with each other. We do know the family became close with at least one servant. A part of Rosamond’s memoirs gives a small insight into the family’s relationship with a governess, probably Flora Duval:

“The children had many friends and happy days, as the times were simple and there were no crowds to interfere with their games. Roger Bradlee (son of Frederick W. Bradlee), who was just [Rosamond’s daughter] Ethel’s age and lived in our block, was her constant playmate from their babyhood, partly because their nurses were intimate friends. Ethel’s nurse[?; word missing], who was known as “Nan,” was like one of the family and lived with us for eighteen years. When she eventually married, [Rosamond’s son] Charlie, whom she had also taken care of, gave her away, though he was only about fifteen at the time.”

Speaking of Ethel, next time we’ll talk about another neighbor she grew up with, and ended up marrying, Freeman Allen.

Cassell's Household Guide, New and Revise Ed., Vol 4, 1880s. Found at http://www.victorianlondon.org/cassells/cassells-23.htm
Posted by KatieS at 8:12 AM No comments:

Email ThisBlogThis!Share to TwitterShare to FacebookShare to Pinterest
Labels: servants

In the twenty-first century, it can be difficult to grasp the very idea that the Gibson House had more servants than family members in 1880. It seems wildly luxurious— and with thirteen people sharing those back stairs,  really crowded! Today I’ll be looking at the servants of the Gibson family, and what their roles were. Records about the Gibson House servants are frustratingly scarce. The best records we have are the 1880 census and Rosamond Gibson’s memoir. By combining this documentation with general historical trends, we can piece together a picture of domestic servant life in the Gibson House.

According to the 1880 census records, there were thirteen people living in the Gibson House that year. Six of these were Gibson family members: Catherine, her son Charles, his wife Rosamond, and Charles and Rosamond’s three children: Mary Ethel, Charlie, and “Little” Rosamond. The other seven residents were the family’s domestic servants. The names, ages, and places of origin of those servants are as follows:

So, what would each of these seven servants have been doing? We aren’t sure  of each person’s specific role, but we have an idea of how the work would have been distributed.

William Austin, the one male servant, was probably a man-of-all-work. He kept up the coal furnace, took deliveries, and might have polished shoes and cleaned windows. We do know  he was not a butler. In America, only the wealthiest families (think the Vanderbilts) had a butler, and usually these high-level servants were brought over from England.

One of the female servants would have been the cook. The cook prepared all of the food for the family and servants, making everything but bread and cheese from scratch. She would have received groceries delivered from Haymarket to the kitchen through the back alleyway. You can see some of the utensils the cook used in the Gibson House Museum’s well-preserved kitchen

One servant would have been the nursemaid, or governess. The nursemaid  took care of the Gibson children. She washed, dressed, fed, and played with them. Although Rosamond did spend time with her children, most of their care was provided by the nursemaid. Sometime after 1880, Rosamond hired a French Swiss girl named Elisa Rolland as the children’s governess, in the hopes that she would pass along some knowledge of the French language .

One servant would have served the role of parlor maid. The parlor maid was in charge of receiving visitors, taking their calling cards, and announcing them to the family. She also had the role of a waitress, setting the table, bringing food out to the family, and washing dishes and china after meals.

Two of the servants would have been chambermaids. Chambermaids were in charge of keeping the house clean. They cleaned bedrooms and parlors, cared for fires, beat carpets, and polished the floors. It can be difficult for us to grasp just how [already used “difficult” in sentence]arduous[?]and time consuming this work could be. For one thing, houses got dirtier more quickly in this time period because of the ash from fireplaces. Just polishing floors might take an entire day, considering that a thorough polisher was expected to rub each spot of floor for thirty minutes with a piece of flannel! The chambermaids were also expected to serve the family’s needs, and were at the beck and call of the call bells located in the kitchen.

The last servant was possibly a lady’s maid. A lady’s maid would have been in charge of helping Rosamond get dressed and undressed. She also would have cared for Rosamond’s wardrobe, including basic mending and removal of stains. She, rather than one of the chambermaids, also could have been responsible for keeping Rosamond’s room in shape, making sure everything was always in top condition.

With so many moving parts, the Gibson House must have been constantly buzzing. What was the relationship like between Rosamond and her servants? What was a servant’s free time like? How did domestic servant life in the Gibson House compare to other homes in New England? I’ll delve into these topics a little further next time.

Image above: Cartoons depicting Irish servants, referred to as Irish "Bridgets," were common and unflattering. The above image depicts a stereotype of Irish domestic servants, but not necessarily a reality.